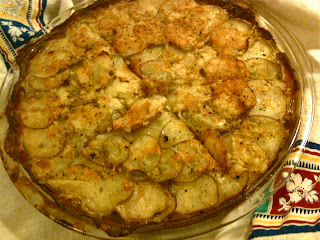 You know what's good? Potatoes are good. I mean, they are so yummy it's hard to even fathom it. I recently made Scalloped Potatoes from pretty much my favorite of the Culinary Arts Institute cookbooklets, 250 Ways of Serving Potatoes. You might remember a similar dish that my friend Stephanie made for The Culinary Arts Institute dinner party back in 2009. This is not the same recipe, but from the same chapter of the same book. I reread her suggestions before I started this one. But really, it's potatoes and butter. How bad can it be?

Pare potatoes and cut into thin slices. Place in a greased baking dish in 3 layers 1 inch deep, sprinkling each layer with salt, pepper and flour and dotting with butter. Add milk until it cane be seen between slices of potato, cover and bake in moderate oven (350 F) until potatoes are tender when pierced with a fork, 1 to 1 1/4 hours. Remove cover for the last 15 minutes to brown. Serve from baking dish. Serves 6.

I fancied-up the top so it would look Frenchified. But if there's one thing I have learned about CAI recipes is that the potatoes always cook longer than it says. I'm pretty sure this isn't the sort of thing where people in the past liked their potatoes toothier either. It's something else that I just can't put my finger on. Perhaps oven temp? Maybe I should have cooked it at 375. One thing I did account for was the use of the word "milk." Nowadays, we have all kinds of milk. I assumed they meant whole milk, which I didn't have, so instead I used half two percent and the remainder half and half, which is a common substitution. It ended up baking nearly two hours, but I'd planned for that. All in all, this was an easy recipe and the potatoes were crazy good. Even better the next day. We had it warmed up with a salad for lunch. I'd certainly make this again.
Posted by Terri at 8:32 AM

Terri, I think you are correct about the temperature of older stoves being different, not being as well regulated. Also, could it be some were still wood stoves. Your grandmother cooked on them.
Mom

That's a good point. I remember Grandma's giant, black stove. I just assumed that since this book was published in 1941 that it would be a modern stove. But really, these recipes were from a much older source, written when everyone would have used a wood stove. Perhaps they just translated "moderate heat" to 350. Though, all of these recipes were supposed to have been tested. It says so right in the introduction.