Gourmet All the Way! 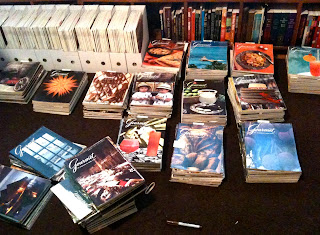 For about two years now, I've been collecting back issues of Gourmet. At first it was just an issue here and there. Then I bought five years off eBay from 1961 through 1965. These magazines served me well. My favorite thing this last two summers has been to go to Ravinia, sit on the lawn with a pick-nick, a glass of wine, and a forty year-old issue of Gourmet.
Well a few weeks ago I was looking at eBay and saw that a woman had put up for sale her whole collection of Gourmets. From 1965 all the way through the last issue. This just about killed me. I was intentionally NOT trying to make a complete set of Gourmet. I mean, our apartment is 697 square feet. Where am I supposed to store something like that? And what kind of right do I have to take up all of that space? Who needs all those magazines anyway? Turns out I do because I wrote the woman. She'd never sold anything on eBay before. Her mother-in-law had subscribed to the magazine and when she passed, this amazing woman kept renewing the subscription. I can see how that happened.  It would take a lot to stop subscribing after all those years. Perhaps like a monthly remembrance of her mother-in-law.
The catch was, I had to pick the magazines up in Kentucky! I just couldn't figure out how to make that happen, so I didn't even bid on them. But no one else did either. When the magazines were reposted Serena convinced me to buy them. The woman who was selling them offered to meet us in a town called Marion on the Illinois side of the boarder. This saved us two hours each way. 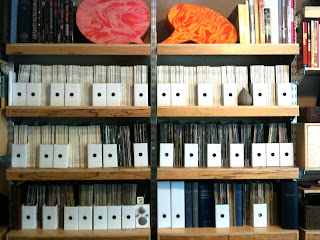 I was really nervous to meet her. I was afraid she would think me a dilettante. Or perhaps resentful that I was carrying away her past. But when we all rendezvoused in the parking lot of some highway-side chain hotel, all of my fears were dispelled. Her name is Terri! And she's an artist and a metal worker and someone who, if I'd met at an opening, I would have immediately loved. The whole experience was odd and intimate. I felt as if I were carrying away her memories, which I guess I was.
After almost a week of rearranging, cleaning, and tossing out, finally the magazines are installed in the dining room. This was at Serena's insistence. She maintains that after the time and expense of procuring these things, it would be foolish to stash them in the basement, or even under the bed. Of course, she is right.
I've got some duplicate years. Now I'm the one posting on eBay.
Posted by Terri at 7:43 PM

Yes, Terri, it was a bit like watching my children go off to summer camp! I know the issues will enjoy a second life with you. Next time you drive south we will have to coax you over the bridge and into Kentucky, It would be fun to spend some time with you on the porch and in the kitchen.

The magazines are great. I've been cooking out of them a lot more than I thought I would. At first I wasn't really interested in the newer issues from the 80s and 90s, but somehow these are turning out to be my favorites. It seems somehow fortuitous that I ended up with them--like they couldn't have gone anywhere else. You know that the next time I'm in Kentucky it will be to visit your kitchen!