Picking one soup from 250 Delicious Soup Recipes (1950) was thoroughly overwhelming. So I went about it scientifically. Too expensive? Cut. Sorry, Creole Bouillabaise, which needed not only a pound of fresh shrimp but also two pounds of snapper.

I was also feeling tired and lazy so anything too complicated was out as well. This eliminated intriguing contenders like Mock Turtle Soup (“Cover calf’s head with cold water …”).

But, despite my sloth, I felt duty bound to at least try to cook something. This inconvenient surge of work ethic knocked out the entire section on Jiffy Soups, which offers a conceptual framework for proportionally blending various cans of condensed soups to create new and exciting taste sensations such as Cream of Corn and Mushroom, and the discreetly named Triangle (“1 can condensed tomato soup, 1 can condensed bean-with-bacon soup, 3 cans water”).*

Lastly, I wanted it to have a shot at being vaguely edible. I remain to this day strangely drawn to Ripe Olive Soup but I didn’t think it would be very hospitable to inflict it on a bunch of strangers. So, after a brief flirtation with something jelled and chilled – which just seemed like it would be classy – I settled on Tuna and Tomato Bisque.

I like tuna, I like tomatoes. They go together well in a nice nicoise salad. Why not a soup? Also: they both come in cans, and see above in re. laziness.

Here is the recipe:

I doubled the recipe and ballparked the quantities, with two 5-ounce cans of Bumblebee Solid White Albacore Tuna in Oil and one 28-ounce can of Dominick’s-brand Organic Whole Peeled Tomatoes.

I drained off the oil from the fish and ran into trouble right off the bat. Am I supposed to add the fish to the soup base? What is this “tuna mixture” mentioned at the end of the recipe? The tuna? ” Mixed with … other tuna?

Anyway. I wound up just throwing the oil in with the tomatoes, onion, and parsley and alliteratively decanting the tuna into a Tupperware to take up to Terri’s. Then I gave the cans to the cat. He was psyched.

Simmered oil, tomatoes, onion, and parsley for 20 minutes – it actually smelled pretty good – and then strained it. I don’t have a chinois so I just pushed it through a colander.

This resulted in a lovely clear tomato bouillon. 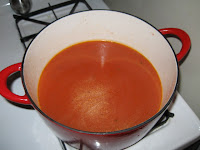 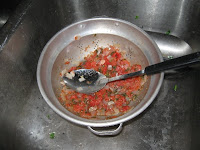 Whisked in the butter, flour, salt, and cayenne, and then the milk. After blending in six cups of a possible eight it was a very pale pink, so I just stopped there. Which was probably good because it wound up having a very “subtle” flavor. Any more dairy and it would have been just Milk Soup With Tomato Essence.

Anyhow. That was basically it. Once I got to Terri and Serena’s I heated it back up and then mixed in the reserved tuna “mixture, “garnished the bowls with parsley, and served.

I also made some cayenne croutons to accompany the soup. Actually, they were supposed to be these elaborate bits of toasted bread sculpture involving cutting bread into doughnut sized rings, and cutting some more bread into long fingers and then threading the whole ring-and-spear unit together and garnishing each bowl with one. But that quickly proved too much work, not to mention a massive waste of perfectly good bread. So I just cut the bread into toast points, dipped them in butter, dusted them with salt and cayenne, and then promptly burned them in the oven.

I brought them along anyway and everyone seemed to think the charred, peppery bread added a certain textural something, but maybe they were just being nice.

Would I make Tuna and Tomato Bisque again? Probably not. It wasn’t bad but it was, as I said, quite milky. By which I mean, “bland.”

But now, at least, I can say that I’ve tried tuna soup.


*Why “Triangle”? Is this meant to evoke some illicit three-way between the tomato, the bean, and the bacon?
Posted by Terri at 5:44 AM