We began the morning with the Tomato Soup Cake, chosen, naturally

, because it sounded so exotic, so strange, and, well, so positively sketchy. Chef Dominic sifted the dry ingredients (nutmeg, cinnamon, flour, baking soda and powder, and ground cloves.) Chef La 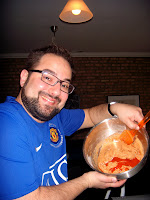 creamed the sugar and butter (rather than shortening) to the melodic sounds of the '70s (Vicki Lawrence, Harry Chapin, The Hollies ...) Butter was chosen over shortening. Why? We didn't have shortening and who doesn't love butter? Midway through, we stopped to assess and photographically document the proceedings. The mix at this point (with Tomato Soup yet unblended in) looked disturbingly similar to refried beans and bland salsa (Chi Chi's anyone?) Chef La then mixed the walnuts and raisins in to the tune of Rufus with Chaka Khan's "Tell Me Something Good." Alas, the report was not good from the kitchen island as the cake's current status was described as "something you'd totally make in pre-school." 10 AM saw the cake go into the oven, the feeling of expectation palpable and heightened somewhat by the eruption of Styx's "Lady" from the Ipod. The necessity of the cak 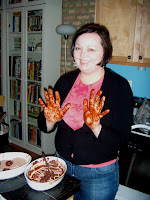 Chef Dominic had the Manchester United v Spurs match to attend (and organic produce to secure), which meant that Rum Truffle Ball preparation would have to wait until the afternoon. Presentational strategy was discussed and agreed upon, while hope was held for the cream cheese frosting intended to adorn the cake.
Hours later, after a nap necessitated by United's thrilling come-from-behind 5-2 victory over Spurs, Rum Truffle Ball production began. The dessert, incidentally, was chosen because ... they are balls and we felt it necessary to ensure that the evening's menu had

balls. Milk chocolate was melted and shaved and rum added. Into the freezer it went as conversation turned to the proper dress code for both Culinary Arts Institute dinner party and witnessing the return of industrial sonic transgressors, Throbbing Gristle. Chef La then formed the balls, dipping them into the shaved chocolate, then marveled at her chocolate smeared hands and, upon tasting one, declared "these are quite good!" The delectables were then packed and plans were made to depart.

Hmmm -- sounds like the Tomato Soup Cake was not a triumph -- and here it was my fall-back when the kids told me at breakfast it was their turn for treats at school that afternoon --- maybe it WAS the cream cheese frosting, or the mocha/butter cream frosting?
Liz Hawkins
Everett, WA

Hi Liz!
Honestly, the cake was better than I thought it would be. Or at least had the potential. There were some winners from the party, but really this cake and the pea and carrot rings were not them.