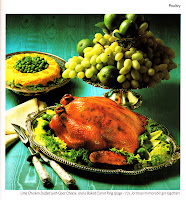 My friend Andrew with the eagle eye spotted the dreaded "carrot ring with peas" lurking in the corner of another cookbook called Cook Now, Serve Later (1990). The book is filled with LOTS of lovely color pictures and despite the obvious mid-centuryness of the recipes, the photos clearly have an early 80s healthy food vibe. That's why this carrot ring is such a mystery. There are many mysterious things about this book. First of all despite the fresh photos, the recipes seem REALLY old. Take "Gazpacho Aspic" and the notorious "Carrot Ring with Peas" for example. But this book is from the editor's of Reader's Digest a magazine actually predicated on the notion of reprinting--an early re-blog, if you will. Right this minute I even have a stack of Reader's Digest Condensed books from 1963 and 1964. As far as I can tell the last reprint of the Culinary Arts Institute Encyclopedic Cookbook was released in 1989 (which still contained the recipe for "Picaninny Creole" by the way) and this book came out in 1990. Hard to believe anyone thought this kind of food would go over well in the 90s.
Posted by Terri at 2:40 PM