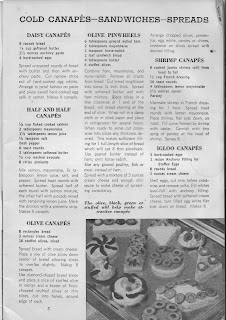 SHRIMP CANAPÉ
1. We followed most of the recipe, except we used lumpfish roe in lieu of caviar. The recipe called for lemon mayo, so we mixed fresh lemon juice with store bought mayo to taste. We cut the white bread with a small wine glass, and used the bread scraps fo

2. This recipe was pretty easy, although we had to handle every little piece carefully. We finished several hours before the party, but the canapés held up well – the toast was still toasty and the shrimp was still glistening. When we try this recipe again, we may experiment with using limejuice, and perhaps trying a different marinade for the shrimp.
Posted by Terri at 4:09 AM