Last night I performed, if not a miracle, a pretty good magic trick. Even though most of my recipes consist of “Open, Peel Film Back, Heat for Three Minutes,” I somehow turned four simple ingredients into some of the most delicious barbeque pulled pork I’ve ever had. And it was easier than standing at the microwave, waiting to stir mid-defrost.

Step 1: Open the Crock-Pot® you bought four months ago. 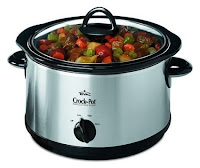 Please note, this is for illustrative purposes only, and my Pot never had food in it before last night. I would show an image of mine, but it’s in the dishwasher.

Step 2: Slice two small white onions and lay on the bottom of the Pot.

Step 3: Put raw pork, with excess fat trimmed, on top of onions. (I thought I used pork loin, but there were a few pieces with bones in them, resembling pork chops. The bottom line is that you can use any cut of pork according to all of the recipes out there.)

Step 5: Do whatever you want while it cooks for approximately four hours. Seriously. You don’t have to do anything with it except let the Pot work its magic! I took a nap, watched a movie, cleaned a little and walked the dog. 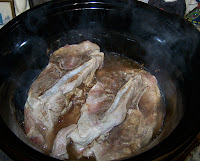 Step 6: Drain off as much liquid as you can (there isn’t a picture of this because it looked like consommé) – I had about two cups worth – and remove any bones. At this point you can break up the meat into smaller chunks easily with a fork.

I used about one cup of Coke. This is classified as a Southern secret ingredients, because our Southern friends take their Coke very, very seriously. So seriously, in fact, that if you do manage to find Pepsi products in the store, they’re usually more expensive than Coke products.


Step 9: Stir the meat until the sauce and Coke are incorporated. Put the lid back on and cook until your guests arrive. (In my case, this was about another four hours, so I turned it to Warm for the last hour.) I suspect that the longer you let it cook, the denser the sauce becomes, and the flavor is more intense. 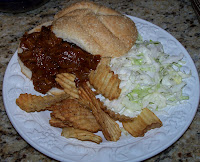 Step 10: Happy Vittles Time! Serve on the best buns you can, with Terri’s Rockin’ Coleslaw and Kettle Salt and Pepper chips.

Of course, pleasant company and saucy pork with fried potatoes are always a recipe for a good time, but this meal was so tasty, so easy and (if I say so myself) so impressive, it was almost like having staff cook for you.

(editor's note: Today I was at the supermercado and saw that Sweet Baby Ray's has a chipolte-style BBQ sauce. It think that would be great in this recipe.)
Posted by Terri at 7:50 AM