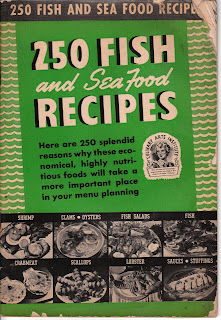 Last time I was at La Frescasita they were having a big sale on tilapia fillets. I bought a bunch and popped them in the freezer figuring that there was always something to do with white fish. When I first received 250 Fish and SeaFood Recipes (1940) I thought I would never end up cooking from it. (note: The 1970s edition is called 200 Ways to Serve Fish and Sea Food, but the title page reads 200 Different Fish and Sea Food Recipes. I think it's funny how they played loosey goosey with the titles.) First of all the recipes are all things like "take 24 fresh oysters," then it has you shuck them and bake into some kind of crazy casserole. Hailing from the Pacific Northwest, this kind of seafood adulteration is really a sin. I think no matter how long I live in the Midwest I will never abandon this basic tenet of preparing seafood. But for the sake of this project and the uninspiring frozen tilapia, I turned to The Culinary Arts Institute.

Right off the bat there were a couple of acceptable fish recipes. I chose "Baked Fish Fillets." The recipe was simple and I had all that was needed. 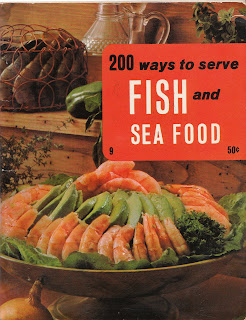 Cut fillets into serving pieces. Combine milk and salt. Dip fish into milk, then into crumbs being sure fish is completely covered with crumbs. Place in greased baking dish or on oven proof platter, sprinkle with oil and brown quickly in very hot oven (500F.) 10 to 20 minutes. Do not add water. Serve with Almond Butter Sauce, melted butter, Maitre d'Hotel Butter or Lemon Butter. Serves 2

I followed the recipe closely and it turned out well. Since I didn't have any bread crumbs, I made some from pita that I had in the freezer and topped it with butter. If I were to make this recipe again, which I will, I would definitely season the bread crumbs. I am unsure whether or not packaged bread crumbs were popular in 1940. Maybe they were expecting my bread crumbs to already be seasoned. Anyway, it was good. I made "Tartare Sauce" from the final page. It was good as well. I served the fish and tartare sauce with a packaged mushroom risotto with peas and a green salad.
Posted by Terri at 5:51 AM