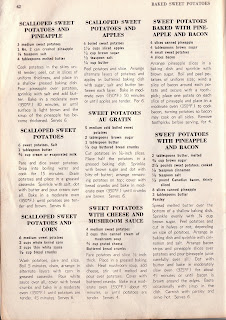 One of the things that I love about my weekly produce box from Newleaf Grocery (www.newleafnatural.net) is that it forces me to work with unfamiliar ingredients and since much of the produce is local, at certain times of the year I have an abundance of a particular vegetable. Now for example, it’s sweet potatoes. Last week I had some great sweet potato fries, processed and froze some uncooked fries for a future date, and I also fed some to my dog who loves them. But that still leaves me with about a half a dozen more. I turned to 250 Ways of Serving Potatoes (1941) for help.

There were MANY more recipes for sweet potatoes than I expected in this book. I don’t really think of sweet potatoes as a potato. I mean, if I’m in the mood for mashed potatoes or tater tots, then sweet potatoes don’t really do the trick. But I guess in this case they count. There was terrifying similarity in the recipes. Mostly it was all sweet potatoes, butter, and brown sugar in some combination. They’d change it out a little with honey instead of sugar, or marmalade instead of sugar. You get the idea. The single recipe I use as an example of my grandmother’s horrible cooking is in this book: “Sweet Potatoes with Cheese and Mushroom Sauce.” And by mushroom sauce they mean canned cream of mushroom soup. The recipe is right next to the one I made. I also wanted to mention that there is also a recipe for "Pickaninny Creole" on 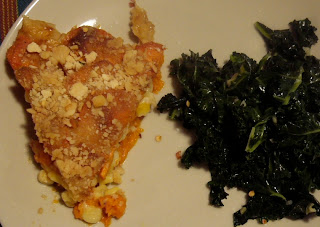 page 41. Though it shouldn't have, this surprised me. Immediately I ran to The Culinary Arts Institute Encyclopedic Cookbook. This is really just another repackage of the previous booklets. I just had to know if "Pickaninny Creole" made the cut to this 1964 edition. It did. Really, did no one ever look at these recipes again?

The "Scalloped Sweet Potatoes and Corn" recipe was pretty good. There were a couple of small problems--my fault, mostly lack of planning. The recipe says to boil the potatoes, but I always prefer my vegetables roasted and since the sweet potatoes I had were so small, it didn't really take long. The thing is, I was then left to peel them hot if I wanted dinner to be ready by the time Serena got home. It also calls for white sauce, which I made from the Encyclopedic Cookbook. Here's the dumbass part, I didn't check how much the recipe called for. So after I made the white sauce, I dumped it on my casserole only to find I didn't have enough. But since my potatoes were so small I just poured a little extra milk in and called it good. It was supposed to cook for 45 minutes, but when I pulled it out the whole thing still looked pale and dry. I added a bit more milk and some butter dollops on top. I mean, what doesn't taste better with butter? I served this with a green salad and kale sauteed in butter. I would definitely make this again.
Posted by Terri at 3:22 PM