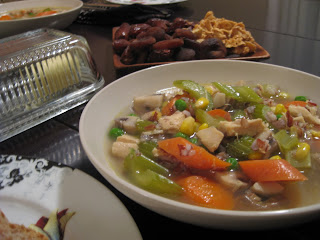 Our fabulous new fruit market La Frescasita is having a big sale on chicken this week. Serena suggested we make some chicken soup this weekend, but I rejected that because chicken soup just seems so boring.

Well after a few hours of podcast editing this morning, that "boring" chicken soup started to sound pretty good. There wasn't much in the refrigerator, so I headed up the street to La Frescasita to take advantage of the sale.

I tried to find a recipe in 250 Soup Recipes, and I even checked 100 All American Recipes, but they were universally bad. The main chicken soup recipe had ham it. Really, ham? I'm big girl, I can make chicken soup without a recipe.

Sadly, I didn't have any pre-made stock on hand and I wanted dinner to be ready by the time Serena got home, so the organizing of the preparation was most important. First, I baked the chicken for about an hour. When that was done, I broke the chicken up and let it cool a bit. While that was happening I took my two biggest pots and placed them on the stove--one for soup, one for stock.

I chopped all of the vegetables and placed them in the soup pot, all the butt ends into the stock pot. Likewise with the chicken. I pulled all the good bits and coarsely chopped it for the soup, while the carcass went into the stock pot. I also added to the stock one quartered jalepeno and a quarter cup of sherry. To the soup I added a bag of frozen corn. The soup pot was placed on low, where it stayed for hours. But the stock, well I kept it at a low boil until everything was mush.

After about three hours, I drained the stock and added it to the soup. What makes it Rogers Parkish, besides the jalepeno, is the addition of a carton of leftover brown rice from Grande Noodle. Now, I have no idea what kind of rice they use, but it is the best brown rice I have ever had, practically purple in color. The last thing I added was what I had left of a bag of frozen peas. Nice, bright color and I got to get rid of some old peas.

Serena brought home a whole wheat baguette. I swear, this is the best chicken soup I've ever had.
Posted by Terri at 5:42 PM