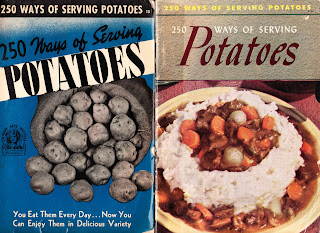 This evening I will be making "Meat Muffins" which can be found on page 36 of The Ground Meat Cookbook (see previous post). There are no specific serving suggestions, though earlier in 250 Ways of Serving Potatoes (1941) I saw a mention of "French Potato Balls" but there was no recipe. There was a picture which mentioned using a melon baller, which sounds like a great idea to me. Since they will be so little, I'm just going to cook them in a pan.

Here are two versions 250 Ways of Serving Potatoes (1941). The only difference is the cover. Both are dated 1941, but it is obvious that the blue one is the older of the two. Also, it is numbered 13 while the color photo cover is 113. Curious.
Posted by Terri at 2:17 PM