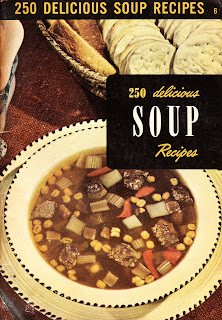 Monday was the last day of school and when I got home I was so tired and cold, that I needed a remedy. Even though the supermercado is only two blocks away, I just couldn't face the walk. So I turned to 250 Delicious Soup Recipes (1950) to help me out. On the train home I had been mentally running through the contents of the refrigerator and remembered that I still had all that half and half and also some mushrooms. Cream of Mushroom soup has always been a favorite of mine, but I have never made it from scratch. In one of the old Margaret Rutherford Miss Marple movies she gives a recipe for mushroom soup. Something like: mushroom 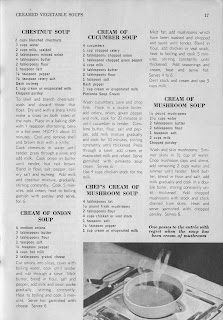 s, stock, flour, cream, bit of salt. At the time I remember thinking, Is that all there is to it?

In 250 Delicious Soup Recipes, they give two different versions. The regular kind and "Chef's Cream of Mushroom Soup." Of course I picked the chef's version. I followed the recipe pretty faithfully except that I used half and half. I was fresh out of veal stock so used chicken. The only thing I would do differently next time is to start with a roux and then add the mushrooms. The mushrooms released so much liquid that it made browning the flour difficult.
Posted by Terri at 7:56 PM