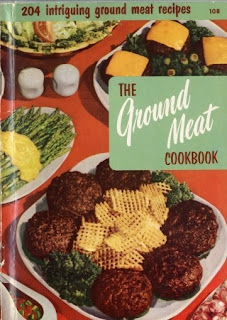 Yesterday through Coudal Partners Serena found this great site where someone has posted the full text of The Ground Meat Cookbook (1954). I haven't seen this book before so you know how excited I was to read it. The resolution is pretty good, so it is possible to work from it. As you can see by the cover, it's a stunner.

The books I have are all from the 1940s or the 1970s, but this is from the 1950s series. Although I've seen the covers, I've never looked inside. The contents are spectacular and there are some differences between this and the ones I own. First, there is playful use of illustration and color. For example, the charming illustration of lambs in swimsuits at the beach atop the recipe for "Frosted Lamb Loaf." At first I thought they were poodles, but why would there be poodles at the beach? Another of the illustrations depicts a tarted up row of dancing pearl onions adorning the recipe for "Liver Dumplings."

The thing that is noticeably missing is the name of Ruth Berolzheimer. This seems odd to me because the two series I have 40s and 70s both have her name on it. So I am wondering if when the original series of the 40s was re-worked, they simply kept her name since it was she who compiled the recipes in the first place. Up until now, I thought that her tenure at Culinary Arts Institute was un-interrupted throughout that period.

Please try a recipe or two and let me know how it turns out.
http://www.meatbook.com/index.html
Posted by Terri at 3:38 PM