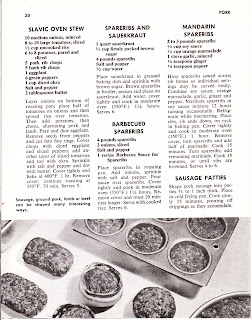 The "Meat Muffins" were a complete success! The recipe was easy and I followed it exactly. There was, however, a bit of hesitation at the glaze. It called for half a cup of ketchup mixed with half a cup of brown sugar to be brushed on top about mid-way through baking. In the refrigerator I have some Sweet Baby Ray's Hot 'n Spicy Barbecue Sauce, which is my absolute favorite. It would have been simple to just brush the top of those meaty little muffins with that, but I really wanted to give the recipe a go. I'm glad I did because the glaze became quite smokey and nice as the muffins cooked and the brown sugar did its magic. I used only a quarter cup of each of the brown sugar and ketchup and I'm glad I did because I had more than plenty. I would be interested in knowing what ketchup was like in the early 40s, if it was made with corn syrup or sugar. It seems to me that this glaze would be just as good or better if made with tomato paste. 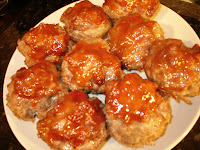 The picture on the right does not accompany any particular recipe, but is a serving suggestion from 250 Ways to Prepare Meat (1969). It reads, "Sausage, ground pork, lamb or beef can be shaped many interesting ways." Why yes, yes they can.
Posted by Terri at 9:09 AM

Ketchup was made with sugar or molasses in the 40s. Corn syrup didn't as we know it today didn't get created until 1967-68.

I wish you had included the meat muffin recipe in your post.

Here's the link to the recipe for Meat Muffins. I don't own this cookbook but luckily someone posted the entire Ground Meat Cookbook online.
http://www.meatbook.com/3637.html