Serena sent me this great article from The Village Voice. It's called "Our Ten Best NYC Restaurants of the Last Two Centuries." One of the restaurants listed is Delmonico's, reportedly the oldest continuously operated restaurant in New York. I was supposed to have dinner there last Thursday. If it wasn't for the winter storm that grounded the outgoing planes from O'Hare, I'd be writing you right now about the fabulous time I'd had eating Steak Delmonico's and Lobster Newburg.

The lure of the oldest restaurant in New York is pretty seductive to a gal like me. Delmonico's first seriously hit my radar last year when I read an article in Gourmet (February 1962) 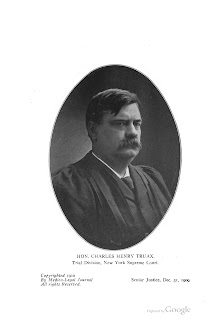 called "Lunching with Father" by Carol Truax. In this, Ms Truax tells of her Saturday luncheons at Delmonico's with her father, the Honorable Judge Truax of the Supreme Court of New York--a fat cat in every possible way. In this remembrance, she's a little girl, "beruffled and beribboned." She doesn't give a specific date but her father died in 1910, just weeks after his retirement from the bench. (A search of Google Books brought me to a lovely tribute in Medico-Legal Journal, March 1910. See picture.) For sure, this bit of fluff is a tad on the pretentious side, but nonetheless it's very interesting, even if it is the memory, at least fifty years later, of an eight year old girl. Her father has the porterhouse steak and little Carol has squab. Judge Truax orders a bottle of Chateuax Margaux '87 for them both. As is so true with the old Gourmets, this is basically just food and wine porn.
In "Lunching with Father," Truax calls it Oscar's Delmonico's. At the end they visit the Waldorf-Astoria where Oscar is their waiter. The Village Voice article discusses Oscar and his big move from Delmonico's to the Waldorf-Astoria. I can't help but imagine that Gourmet readers of the early sixties would have known the reputation of Oscar.
The Bowery Boys have a great episode all about Delmonico's.
Posted by Terri at 10:40 AM