Last week I was in Everett visiting my mom. We had a great time, and one of the high points was a visit from my friend Margaret. I'd met her when I was just a schoolgirl and as our city library's historian, she helped me research a paper I was writing on prohibition and the history of Everett's speakeasies. She showed me a tavern where back in the day the proprietors kept a caged bear in its interior courtyard so the liquored-up longshoremen could wrastle and gamble away their leisure hours. Later, I worked at that same library. Needless to say, I credit Margaret for my love of history and perhaps even its intersection with popular culture, though I'm not sure bear wrestling counts as popular culture.

I was telling her about the essays I've been writing about nostalgia, the domestic, and popular culture that isn't so popular anymore. And guess what? She'd just finished writing an article for HistoryLink.org about the real world houses th 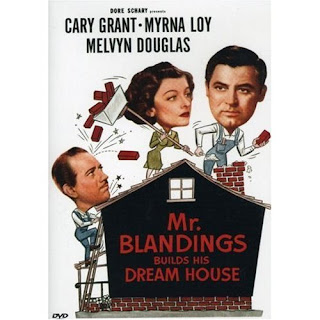 at were built to support the release of the film Mr Blandings Builds His Dream House (1948). The same film was remade in 1982 and titled The Money Pit, which starred Shelly Long and Tom Hanks. Now in case you missed this classic, it stars Cary Grant and the always charming Myrna Loy. Every time I indulge the fantasy of building my own place or undertaking some kind of gut rehab, I just watch this movie and the whole fantasy disappears. I love this movie and I still feel sorry for Mr and Mrs Blandings and all the money their house costs even though I know that 62 years later that rolling spread in Connecticut near the commuter rail line is probably worth more than I will make in the remainder of my lifetime.

Despite my best efforts, I can't convince Serena to buy one of these "Blandings Homes." I've told her that it would be a great investment and that we would be living in the midst of history, but no luck. I did, however, notice that on the interwebs there are copies of the Blanding floorplan. So maybe if I won the lottery we could build our own from the ground up. But then, they made a movie about building this exact same house, now didn't they?

Dolores Hayden talks about Blandings fever in her book Building Suburbia. This is an all-around good read, too.

I will surely read it. I maybe have a little bit of Blanding's fever. Though it is surprising that anyone ever built another house after that movie came out.