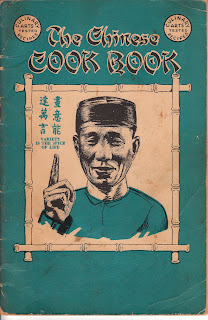 A while back my dear friend Stephanie gave me a cookbooklet that belonged to her aunt Gingie, The Chinese Cook Book (1936). When she handed it to me, I was surprised to find that I didn't recognize it. It clearly says "culinary arts tested" on the front and on the back it says "Culinary Arts Press, America's Largest Cook Book Publisher," located in Reading, PA. Frank Daniels on his cookbook website says that this is a precursor to The Culinary Arts Institute books I know and love.

There are lots of interesting recipes. It took me forever to figure out what "Chinese Sauce" was, but then I read the introduction and it says that is soya sauce. Duh. It's an old cookbook so all of the recipes are written in paragraph-long narratives. One that struck me was CHINESE PINEAPPLE SALAD: Boil one pound bean sprouts in pineapple juice. Cover with mayonnaise dressing, flavored with Chinese sauce. Sprinkle with chopped nut meats and garnish with sliced kumquats or crushed pineapple. (Doesn't sound too authentic to me.)

This evening I made radish salad. It looked pretty tasty. 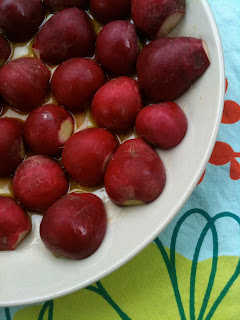 e the halves face downward in the sauce, and let them remain thus 15 minutes before serving.