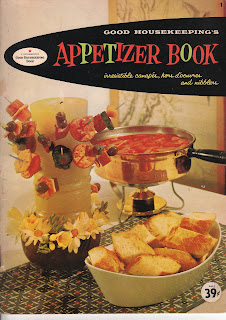 My old friend Krista was in town last week for a conference. It'd probably been fifteen years since we'd seen each other. I know her from Seattle, back in the day. We saw the Dead Kennedys together. She was with me when I broke my foot at a TSOL, Fartz, and Fastback show. We saw Iggy Pop for our 15th birthdays. Lock down. Cops came. Mom saw me on the news. It was all very punk rock. Anyway, she sent me a couple of cookbooklets she had kicking around. We are both strikingly less punk rock now.

Good Housekeeping's Appetizer Book is the non-Culinary Arts Institute cookbooklet she sent along. First off, the cover is great. I have never considered using a pillar candle as a holder for kabobs. Genius! Sadly, some of the recipes are pretty gross. Lots of bologna. Katsup and peanut butter. But there are also some smart suggestions for relish trays. When I started this project I thought relish trays were stupid, but

I've come around. Still, there is a limit to how much time a modern gal can spend transforming vegetables into other objects.

It has become obvious that I don't post during the semester, only on school break. I'll work on that. But for now I'm off for the summer and have a backlog of awesome recipes and cookbooklets. It'll take me three months even to catch up.

(p.s. The recipe on the right refers to "French Dressing." It took me forever to figure out that at one time French Dressing meant vinegrette. I have no idea how the corn syrup and katsup mess that is now called French Dressing came to that moniker, especially since no French person would ever eat such slop. Just think vinegrette when you read that term.)
Posted by Terri at 9:17 AM

Glad you are enjoying the books! I didn't even notice the role of the pillar candle.

I have a vague memory of the womenfolk of my family in the kitchen before some big dinner (Thanksgiving?) swapping tips for making carrot curls. This was serious stuff!