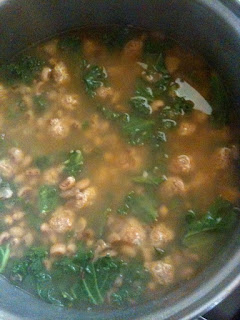 This past Wednesday I was flattered to be one of eight soupmakers in this week's Soup and Bread. In case you're not familiar, this is a weekly wintertime fundraiser hosted by The Hideout. Its founder is the super fabulous Martha Bayne, who writes amazing articles about food, and Chicago, and food in Chicago, and Chicagoans and their access to food, local food, slow food (and I don't mean your server's been smoking weed). Soup and Bread has been very successful raising money, but also in raising awareness for local charities that fight hunger. The proceeds from my Wednesday night benefited First Slice.

For my turn at the ladle I made Black-Eyed Pea, Kale, and Chorizo soup. Usually I make this from scratch, with dried beans and homemade chicken stock. But since I was feeding a crowd, I had to make two gallons of it. I don't have two gallons of homemade chicken stock on hand, so I had to go with canned. The nice thing about this recipe is that it is readily adaptable to convenience foods. Off and on for ten years, I worked at The Sister's Restaurant in Everett, Washington. They taught me to cook, and specifically to make soup. We served this soup there and it was always really popular. Of course, at The Sisters the soup stock was homemade, but Hey, we do what we can, right? What follows is my version of The Sisters' soup.

Bring chicken stock to boil, add black-eyed peas in large pot. Reduce heat. In a skillet, sauté onion in olive oil. Add to pot. In the onion skillet, cook the chorizo though, but not until dry. (When using chorizo in natural casing, you may press it out a little at a time into balls. It’s not so important that they be round, but you’re aiming for little bites of chorizo in your soup and not have it turn out crumbly like ground beef.) Brown chorizo in batches. Do not crowd pan. Drain on paper towel. Add to pot. Simmer on low for two hours stirring occasionally. A half-hour before you intend to serve your soup, skim any accumulated chorizo fat from the top. Chop kale into pieces and add to pot. Serve when kale is cooked, yet still bright green.

Yum! We would need to take out the chorizo, but I love this kind of soup - very similar to a Portuguese caldo verde.

LOVE your blog. Catherine turned me on to it.