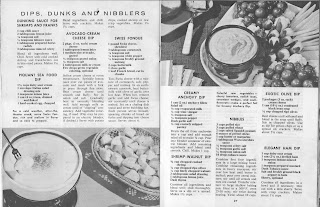 Saturday was my writing partner's birthday. Nicholas was hosting a cocktail party and since I really didn't get it together to get him a proper present I thought, Why don't I make some party snacks. What I had in mind was something like Chex Party Mix, but you know, more Culinary Art Institutey. Of course I turned to 250 Tasty Sn 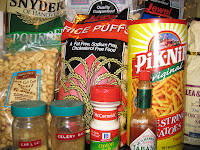 acks (1970). You might remember this title from back in November with the discussion of cheese balls. Anyway, there were two recipes, "Nibbles" and "Crunchy Nibblers." The recipes were very similar, but I chose the "Nibbles" because of the reliance on Worchestershire sauce as the main seasoning. I did, however, add the shoe string potatoes from the "Cruchy Nibblers," and am glad I did. I've posted a couple of the pages in case you want to try some of these spectacular snacks yourself. I think the "Creamy Anchovy Dip" looks great. I scanned it hi-res so that you can try the recipes yourself.

This recipe posed a few problems, though. Because it was only 5 degrees outside, our friend Jessie gave us a ride to the store. Serena and I tried desperately to hurry, dividing our list and buying only what we needed for the party. Well, do you know where to find shoestring potatoes? And we had dried onion soup on the list (see next post). Also, the recipe called for onion salt, garlic salt, celery salt, and salt. Well, all we had at home was celery salt and of course gray sea salt. I was really surprised at how expensive those adulterated salts are, so we just bought one--onion salt. 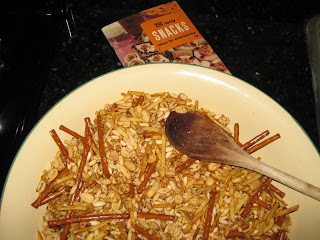 ut well. Serena called it "subtle," which it was. But I made a few choices along the way that added to the subtlety. First, I used celery salt, onion salt, and dried garlic. I left out the garlic salt and...the salt. Really, it seemed like there was PLENTY of salt in this recipe. It also called for AN ENTIRE CUP OF BUTTER! Of which half was unsalted. My friend Andrew suggested that back when this recipe was originally copyrighted (1965) people drank and smoked a lot and maybe needed the salt. I think maybe we needed the salt a little, too.
Posted by Terri at 2:53 PM