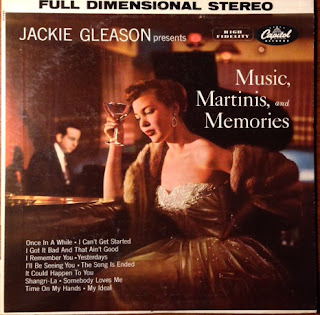 Today my friend, Stephanie, took me to Madam Zuzu's in Highland Park. It's the second time we've been there. Mostly it's a tea shop, but it has records, too. I found this lovely album by Jackie Gleason called Music, Martinis, and Memories. As you can see, the cover is amazing. On the back it reads: music, martinis, and memories...each creates a wonderfully soft, romantic haze. This makes it sound kind of like Gleason is going to get me drunk and take advantage of me. 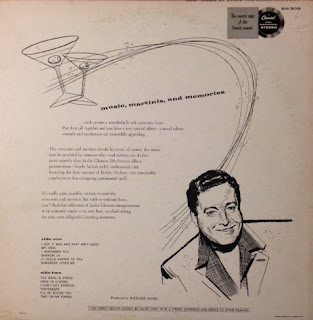 Until this afternoon, I had no idea that Jackie Gleason had anything to do with music. There were no liner notes and the text on the back was of little help, so I turned to the trusty Wikipedia. Apparently, Gleason just willed these albums to happen. He didn't play on them and wasn't the producer exactly. It's more like he said, "hey, make a record that will help me get lucky this weekend." Et voila! My new favorite record. Wikipedia called this record "mood music." It was hyperlinked, which I thought was pretty odd. Turns out this music genre actually has a name: beautiful music. I have a big collection of this music. At my favorite local record shop, Audio Archaeology, I just usually go in and ask the man at the counter if he has any new White People music. He hooked me up with a great Henry Mancini album called Dear Heart and Other Songs About Love. Most of the songs are pretty messed up. Now that I have these key search terms, the world of beautiful music is my oyster. Music, Martinis, and Memories is on Spotify if you want to listen to it.