Have I mentioned that I’m in love with Ina Garten? I mean really, really in love. I used to just read her cookbooks (Barefoot in Paris is my favorite), but then her show Back to Basics appeared on Hulu and that’s when I was really smitten. Her freckle-kissed nose. Her joie de vivre. The portrayal of life in The Hamptons that boarders on pornographic. It’s my favorite way to end the day.
Recently there was an episode where she made a dessert of roasted berries, finished with walnuts, served atop Greek yogurt. While I was watching the show, I didn’t really think much about it. But the next 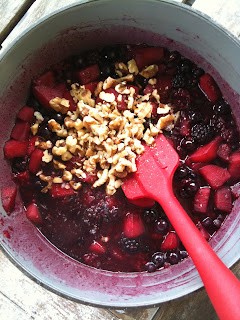 weekend, we were invited to our friends’ house for dinner, so Serena and I decided to try Ina’s dish. It was a big hit.

The thing is, I don’t live in The Hamptons, and for most of the year good berries are hard to come by. So, I bastardized Ina’s fresh fruit recipe and came up with something similar that I have been serving for breakfast all through the worst part of winter.
In a heavy skillet add about a quarter cup of water, just enough to wet the bottom of the pan. Add a diced apple and diced pear (or whatever it is you want to get rid of) and let these cook a few minutes on medium, just to soften them up a little. To this mixture I add about a half-teaspoon of cinnamon and a generous pinch of cardamom. Then I add a bag of frozen organic mixed berries. And if they are reasonably priced, fresh berries too. Right now organic blueberries are around for about 2.50 so they have been well-featured. I add a big pinch of kosher salt and the let whole thing bubble around together, until the many have become one, but not so long that the berries break down. When it is all over, stir in chopped walnuts. Serve on Greek yogurt.
This has been such a pleasant addition to our morning. Bright and sunny. It’s easy to make, too and has the ability to give new life to tired apples and pears.
Posted by Terri at 7:40 AM

Labels: Back to Basics, Barefoot in Paris, Ina Garten