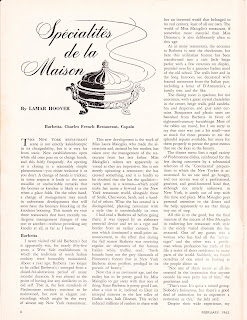 So, here's the thing...It's like Matt Weiner is in my head, or next to me in bed reading over my shoulder. Monday night I was watching the new episode of Mad Men where Don and that girl, and Betty and Henry were all coincidentally out to dinner at the same restaurant. And what was that restaurant, you might ask. Well, it was Barbetta. I know this because that's what the menu said. But the clever Mr Weiner put that there for a reason. He leaves little presents around his show for those who are interested. I can't imagine how interesting the show would be if I knew more about advertising than what I learned from The Deceivers.

Every now and again Gourmet reviews an old or established restaurant--and that's from the early '60s. Of course I Google them, and some of these restaurants are still around. Sadly, some I've just missed by a year or two. When a restaurant is 128 years old, missing it by a half a decade or so doesn't seem so long. When Barbetta was reviewed in the February 1963 issue, it was celebrating it's 55th birthday and a name change--it had been called Barebetta's. The article focuses on its remodel and the new management by Laura Maiogl 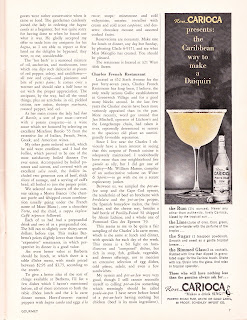 io who took over for her father. Although the review is excellent, it reveals its early sixties viewpoint: "She has created something, and it is hardly to be doubted that she has the qualities--rarely seen in a woman--which could make her name a byword in the New York restaurant world..." Well, Ms Maioglio still runs Barebetta and it looks to have a delightful outdoor dining area. Lamar Hoover is a dick and new to the job having replaced the queeny old reviewer, Alvin Kerr. Although this new reviewer is also queeny, he is not charming as Mr Kerr was, this guy's just a jerk.

Anyway, it seems to me that Weiner must be reading these old Gourmets because I keep bumping into articles I've read. Certainly Don and Betty are keeping up with the happenings in the New York restaurant scene. I mean that scene could only plausibly happen because at that moment, after 55 years, Barebetta was HOT HOT HOT. I plan on visiting sometime this winter. Maybe I'll see Matt Weiner there, or even better, Betty Francis.
Posted by Terri at 7:51 AM

I realize this seems impossible, but I don't think I've ever had a truffle. At least not a truffle made of chocolate. That ad for truffles makes them sound like some kind of magic--fancy magic.