Gourmet: The Magazine of Good Living 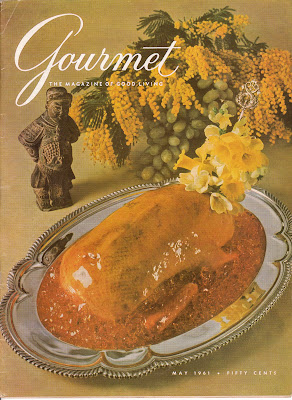 I have fallen down the freakin' rabbit hole. This food and nostalgia research project has been great fun and is yielding rocking essays, but once in a while I feel as if I am losing my grip on reality. A couple of months ago my friend Martha gave me a 1961 issue of Gourmet Magazine that someone had left at her restaurant (that I've mentioned before, where I used to work called The Sisters). Anyway, I was completely enthralled. Despite its stinky mustiness, I read every single page. Cover to cover. Including the ads. Immediately I got on eBay and bought a full five years: 1961-1965 including index.


Honest to god, I swore I wasn't going to blog about this. It was too easy. Too nostalgic. The magazine is rife with juicy tidbits. There could be a whole blog just about this.
I have now read all of '61 and of '62. The thing is, when you immerse yourself in the media and culture of a specific era some of it rubs off. We've heard this argument a million times about pornography and violence. Well, I hate to stand here in the camp of Andrea Dworkin, but after what must be two years of reading Culinary Arts Institute cookbooks, Mastering the Art of French Cooking (1961), and now two years worth of Gourmet, I find myself inured to the likes of aspic (see picture).

Other things are happening too. I decant my half and half into a glass container. Organ meats, which I loved as a child, are now regaining their appeal. We use only cloth napkins. And as I've mentioned aspic has started to look appealing. Perhaps it is too much Dick Van Dyke Show.
Oh, and did I mention that I bought all of 1948 in a single bound volume. Do I see an intervention?
Posted by Terri at 7:16 AM

For more on aspics, check out _Ham Biscuits, Hostess Gowns, and Other Southern Specialties: An Entertaining Life_ by Julia Reed. She makes the case that the summer months are just too hot for anything else in the South. I must concur.

This is the exact argument made by Gourmet. When it's too hot, there's nothing else to serve but aspic. I'm not so sure, but to be honest, I've never eaten aspic--though I have written about it. It is now obvious that I should overcome this fear. Not exactly an aspic, but I've just read an article on jellied cordials, what my friend Andrew rightly identified as the precursor to Jello-shots. A whole meal: jellied ginger pear salad, tomato aspic, Cold Duck in Aspic (pictured), followed by creme de menth jellied cordials. One wouldn't have to chew a bite!

I was thrilled to see you write this re Gourmet:"Immediately I got on eBay and bought a full five years: 1961-1965 including index."

I hope you still have them. If yes, I've been looking for an article by Alvin Kerr in an issue of Gourmet from 1961 or 1962. The more precise date range: on or after August 1961 to March 1962. This is the pull quote that I have from it: "Vietnamese cooking is a synthesis of Chinese, Indian and Indonesian elements." (This quote was included in an ad placed in 1962 by the restaurant called Viet Nam, located in NYC.)

If you have it, would you reach out to me? Thanks.

Hi MoniQ,
I do still have these and I will try to locate your article. Give me a few days. I can't wait to read it. Are you a researcher?
--T

Thanks so much for the speedy response and the offer to find. NYU Fales Library (I'm in Brooklyn) has the full collection, but they are closed for pandemic and for renovation.

I am a novelist and essayist. Here's additional info: www.monique-truong.com

Hi! I send an email to your website address with the information you were looking for. Good luck!

Amazing! Very, very generous of you. Thank you.