Despite our love of good food, Serena and I rarely spend the big bucks on fancy restaurants. Instead we prefer the more humble fare like that of The Cuban Lunch Counter at the back of La Unica (try the fried yuca) or perhaps Hai Yen famous for the 1A. But this week, we splurged. Already we had deep regrets about the two great food events we missed this last year. First the Mulefoot Pig dinner at Blackbird. It just seemed so expensive. Now, of course, I would pay anything to have been there. And then there was the the Green City Market BBQ, which we just didn't get it together to attend. Luckily that happens every summer, so we get another chance. But when Serena read about the Rick Bayless winning Top Chef Tasting Menu at his tony restaurant Topolobampo, man we had to go.

Our friend Stephanie had a birthday a quite a while back, but sadly we lost her gift somewhere inside our apartment. So after months of looking we called it a loss and thought, we should make the night into a belated birthday for our friend. Serena is the one who secured the reservations. She went on Opentable and said she "watched as the reservations disappeared." Finally, she secured us a 5:30 reservation on a Wednesday. Good thing. I checked Opentable again and they showed no reservations available.

The whole experience was amazing and the service fantastic. Friendly, but not intrusive. The Top Chef menu was great--even better than I expected. Although the server described each dish as it was presented, I still wish I had brought along a crib sheet. Some things I liked better than others. For example the smoked quail in barbecue sauce with cole slaw and chilies rocked. The crispy pig's foot, kicked the sucklin' pig's ass. The fresh and tasty seafood offerings, though good, were not startling (like the pig's foot), but maybe that's just because I'm from the Pacific Northwest and am used to seafood so good that sometimes you cry.

Here's the menu I copied from RickBayless.com. Follow the links and it will take you to very lovely pictures. It was dark in the restaurant so really only the picture below (of said suckling pig and pig's foot) turned out. I checked this published menu against my memory to see if there were any substitutions. There weren't: 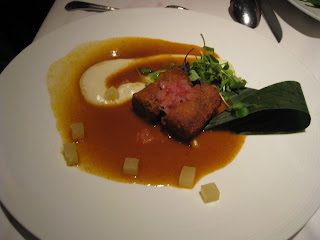 Next time Serena, Stephanie and I plan on going to Bayless's new place, XOCO for churros and hot chocolate! Both of which can be had for something around the price of train fair.
Posted by Terri at 6:48 AM